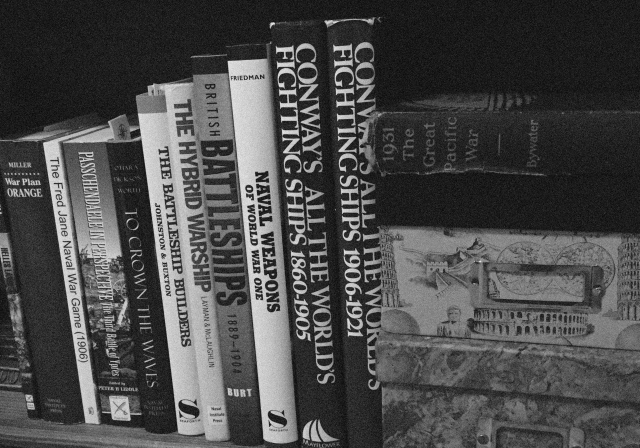 The title of was my first thought for this piece, and than I Googled it. Not a good idea. Don’t try this at home with the kids around.

Well all but me, I have always admired these designs. They were artistic and had a mechanical beauty to them. Today we look at the poor damage control, protection, fire control and wonder why anyone would have wanted to use them in combat. Do not think 2015, but 1915.

These designs that I am talking about were thought of in the 1880s and 90s and with the coming of The Great War were seen by many as antiquated hulls only worth the value of say you have a couple of dozen extra battleships and a few score of armoured cruisers. But these death traps were more than just numbers but an active part of all navies in general, and the Royal Navy in particular. And the Admiralty was willing to send them into harms way.

While I cannot prove this, I have always felt that these old warships were best the best way to see combat. There was the hunt for the SMS Goeben and clearing German raiders from the sea. British used them on the North Sea patrols and at the Dardanelles.

The Great War List
Conway’s All The Worlds Fighting Ships 1860-1905
This is the pre-dreadnought with all of those wonderful and wacky warship designs. Some of them even worked.

Conway’s All The Worlds Fighting Ships 1906-1921
Here we have the great battleships, HMS Dreadnought, USS Pennsylvania and the HMS Queen Elizabeth. Yes I am biased. What is missing, cruisers, many navies the French and US included sort of forgot about cruisers.

British Battleships 1889 – 1904
A grand study with a great deal of detail on the battleships of the Royal Navy from the beginning of steel warships to the end of the pre-dreadnoughts with the Lord Nelson class.

British Cruisers of the Victorian Era also by Norman Friedman
This one is currently not in my collection, yet. But for those that have read this far down the list you have already understood my appreciation for these armoured cruisers. This needs to be a coffee table book in a nautical geek’s house.

Please let me know if there are any titles from the period that you do not want to live without.

Running a Little Behind

Somehow this year has just been running by. No excuses, just life.

While I have spent a lot of time with my 1940 world of Operation Sealion, I have not forgotten The Great War. Projects that I am currently working on:

So please keep following and there will be more to see shortly. Below is one of the fine Armored Cruisers patrolling the North Sea in 1914. Any guesses?

Last night I found out I was a terrorist…

Yep, I. You see I was at my synagogue’s book club and we were working on the summer reading list for the congregation. One of the members offer a new book on the RMS Lusitania when three members of the club started in on the fact that the submarine captain and crew  were terrorists as they were willing to not only sink the Lusitania but fire a second torpedo to ensure that more women and children were killed. I also found out the he refused to fire a third torpedo as he meet his quota of dead women and children. That was from a movie/documentary.

I smiled at the Rabbi and bit my tongue.

Afterwards talking to the chair of the committee and my Rabbi I brought up that I found out that I was a terrorist as I was willing to follow lawful orders on a submarine. Also I pondered how many other terrorists is part of the congregation. They both knew my back story and were willing to let it go, just ramblings of women who had not idea of the context.

I mean the passengers knew they were heading into a war zone, that submarines were sinking ships and that this war was going on for almost a year. It was in most of the newspapers. It would be like me wanting to go to the archeological site in Syria and be surprised that people were shooting. I mean I am an American so I am protected, right? Do I feel for the loss of the passengers and crew of the Lusitania, yes I do, but we all have to remember context and the fact that service men are often asked to do things most people would refuse or at least find distasteful.

I will now get off my soap box.

This past weekend my wife and I spent some time out at Gettysburg enjoying long walks, watching our dog Maya try to find the latest new smell and did some antiquing. In the off season Gettysburg can be very relaxing. I was not thinking at all about my project dealing with The Great War when we drove out on Friday evening.

That changed Saturday morning when I took Maya out for her morning stroll. Within a stone throw away from our hotel was a plaque showing a picture of Camp Colt, used to train American in armored warfare in 1917-19 commanded by Captain Eisenhower.

I knew Eisenhower was doing that here in the states as Patton was doing similar training in France. The funny thing about this is that Camp Colt took up the entire battlefield that we now associate with Pickett’s Charge. I do wonder what if anything is left under the soil
from this time.

So with me o the lookout for a good map I have a new project, that has some potential for The Great War as well as wargaming. (By the way did you know the USMC refought the Battle of Gettysburg in 1922? I didn’t.)

With multiple book releases on the Harlem Hellfighters (and a possible movie) my only question is where are the 15mm miniatures. Will Peter Pig be releasing an American line in time to paint them for the Centenary of 1917-18? How about a new army for Flames of War?

Taking part in Champagne, Marne, Meuse, Argonne, Champagne 1918, Alsace 1918 suffering 1,500 casualties with only 900 replacements this long serving regiment (serving for six months in the line) should make an appearance on the gaming table in 2017-18.

Here is the second card. I have looked through the ones I have and the cards fall into two categories. Staged events or posed shots around an artillery piece or a camp. The fact that the individuals in these images were veterans of the conflict makes me wonder what they thought of having these images taken. 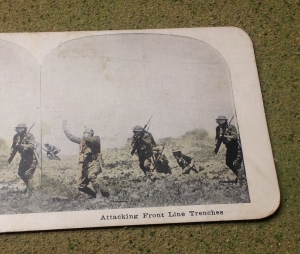 Many years back my Grandmother gave me a gift that she was unaware how much an impact it was to have on me. It came about because I had bought a stereoptic card and I wanted to borrow a viewer. Well my Grand Parents had one and I headed over to view my new purchase.

After seeing the USS Oregon in 3D I thanked them and after a short visit I was planning to head home. Much to my surprise I was offered both the viewer and their cards. I knew no one had ever shown much interest in these. After trying to refuse I took the purchase home. I had used the viewer on several occasions but never spent a lot of time looking at their cards that is until last year.

While getting ready for the Centenary of The Great War, I saw several cards online dealing with the conflict. After going back to my cards, I found a dozen or so cards in my own collection. So over the next few weeks I will share these on both my blog as well as on Twitter.

Let me know what you think.

The Wait is Over

A hundred years ago, less two days the Breslau bombarded the Black Sea port of Theodosia. A hundred and two days from now Grand Vizier expressed regret to Allies for the operations of their Navy. It is not enough. War in on in the Middle East, and the world has changed in ways no one would of thought possible in 1914.

As the Germans advanced deeper into France the British Empire was unifying to assist the home islands. The Indian Army while looking to support operations in east Africa and in France also looked at protecting the oil refineries in Mohammerah for the Royal Navy.

The Persian Gulf for decades was considered the domain of the Royal Navy and the Indian Army. It surprised no one when the HMS Espiegle and HMS Dalhousie arrived in the Shatt-al-Arab protecting British interests.

While the Ottomans were concerned at this intrusion in what they considered their territorial waters they lacked a navy to enforce their claims.

On the 5th of November the Indian Expeditionary Force ‘D’ arrived to protect the facilities and the next day landed at the old fort at Fao.

This blog will follow the advance north to Baghdad in real time using historical sources, period media and miniatures. Lots of miniatures. Together we will fight the battles as the Indian Army advances On to Baghdad.

Posted in Uncategorized | Tagged On to Baghdad | Leave a comment

WWI Aviation is Back

I am pleased to see Will Boucher’s Blog WWI Aviation Illustration is back after a 241 day hiatus. He has produced so many great aircraft art pieces that are a boon to modelers and gamers.

He has started out with two posts on aircraft dear to many interested in the period.

I hope you enjoy this as much as I do.